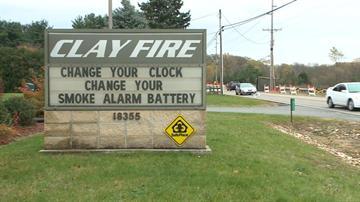 "My wife's in a nursing home and I go over there several times a day,” explained Gene Hoffner, who lives at the intersection.  “My concern is if I'll be able to get out to go over there."

Hoffner protested when the county decided to build the roundabout, he'll be losing a signigicant portion of his front yard to the new roundabout.  But, now that the project is underway, Hoffner’s big concern is whether the crews at nearby Clay Fire Territory Station will be able to safely and quickly move through the coming construction traffic.

"If there's a fire in the neighborhood, by the time they go around and get back it'll take them extra time,” said Hoffner.  “Because this is the main road going up north…there's no shortcut."

The Clay Fire Territory crews aren’t looking forward to the construction either.

"It will be a little bit of a hassle, but we'll work through it," explained Deputy Fire Marshal Ron Melser.

Melser is working with construction crews to develop a plan for how the station will operate during construction.

"We'll work every morning with the construction manager to make sure we have access and understand what they are doing,” Melser explained.  “They'll be able to hear our sirens soon as we come out of the station…they should be able to clear a path."

Melser doesn’t expect response times from the station to be greatly affected by construction in the area.

"We've got five stations, so we'll make adjustments where we need to and we'll get through it,” Melser explained.  “But, there shouldn't be that much of a delay for us to get to whatever we need to get done."

Clay Fire hasn’t yet been told when heavy construction at the intersection will begin.  Residents have been told that the roundabout should be finished by next Fall.