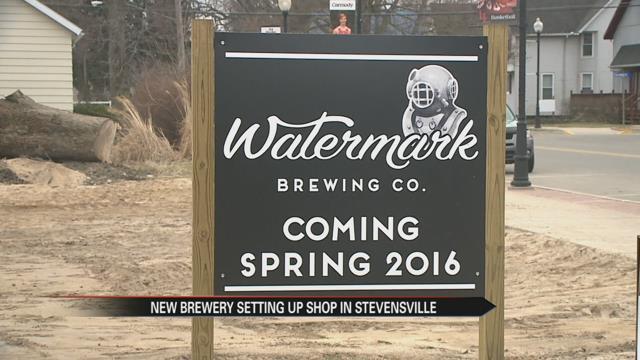 Raise a glass! The village of Stevensville is getting its very own brewery.

“We met, started brewing together one summer and it kind of escalated as we kind of built the business plan,” Watermark Brewing Company. Co-founder Chris Mason said. “We won a few home brewing awards up in Grand Rapids and it kind of went from there.”

That’s how it all began, after Mason took his hobby of brewing beer to the next level with two friends.

“We are a couple younger guys that have been thrown into the mix,” Mason said. “But they’ve welcomed us with open arms and been very supportive with what we’re doing, as well as helping out in any way they can.”

Mason and his buddies were looking for properties  in nearby Saint Joe, MI and Benton Harbor to start Watermark Brewing Co., but then, Mason’s hometown came to the rescue.

“The village came to us and said, ‘Hey, we’d love to partner up with you and sell you this property to build the new building,’” Mason said.

The brewing team closed on the plot of land on Saint Joseph Avenue in Stevensville last November and construction is now in full swing.

Mason said a grand opening is expected in late May.

“Working with the village has been really great because they’ve been very supportive because if you don’t have your local community behind you…it’s really tough to make moves as a brewery,” Mason said.

On Wednesday night, the village council approved a large tax abatement to help with the project.

But it’s not just the village council providing support.

Link and his wife have owned Bert’s Breakfast Korner in Stevensville for 22 years.

They’re not only rooting for Chris, who they watched grow up, but they’re offering him some advice.

“It takes a little time, some hard work,” Link said. “Being that they’re gonna be one of the first [local brewing companies] in our town to do it, I think they’ll do well.”

And that’s what Mason and his team are hoping for, to create a unique attraction for the people of Stevensville.

“Typically the downtown Stevensville corridor is kind of dead after that 5, 5:30 [p.m.] when people go home from work,” Mason said. “So we’re trying to maybe offer up something for the local community to come to and enjoy.”

Mason said all different types of beer will be brewed in the Watermark Brewing Co. building. He also said there will be a tasting section for customers, an outdoor patio and a beer garden.

The Stevensville village manager said over the phone that a new business rehabilitation program in town is really helping boost the local economy.