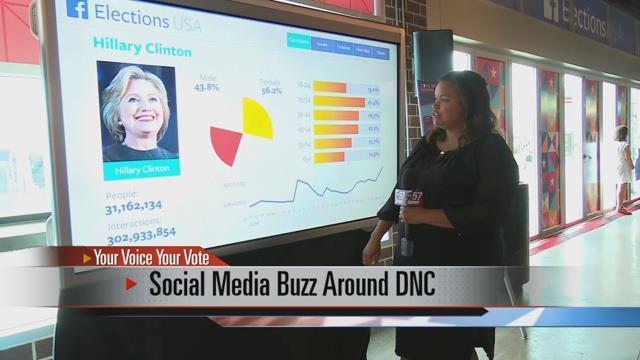 Millions of people will gather around their televisions, computers, tablets and smart phones to watch a moment in history for Thursday nights Democratic National Convention.

Hillary Clinton will accept her nomination as the presidential candidate for the Democratic Party and give her speech at the final night of the DNC.

The conversation has spiked on social media surrounding Hillary Clinton.

There is a data touch screen tracking the ‘who, what, when, where, and why’ that people are talking about on social media from around the country.

Facebook is jumping into politics tracking likes, posts and shares around both presidential candidates.

In Indiana, hundreds of thousands are creating Facebook traffic for both Clinton and Trump.

Facebook is also tracking issues that matter to those on social media.

"The issues that are percolating in Indiana are slightly different than the ones that are national and probably reflect a lot of the local debates that are happening,“ said Patterson.

After the speech many may notice whether or not Clinton’s Facebook popularity goes up after her historic moment of being the first woman to accept the presidential nomination.