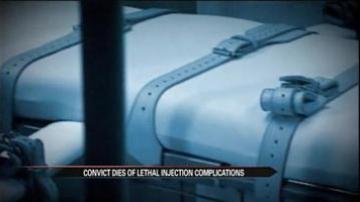 Clayton Lockett was given a lethal cocktail of drugs and after 10 minutes officials declared him unconscious.

Then Lockett started heaving and tried to lift his head. Witnesses say he was convulsing.

Officials said the chemicals did not properly make it into his blood stream.

"It was my decision at that time to stop the execution," said Oklahoma Department of Corrections Director Robert Patton.

A second inmate was scheduled to die that same night after Lockett but Oklahoma's governor issued him 14 day stay of execution while the state reviews its procedures to determine what went wrong.

Lockett died of a heart attack.