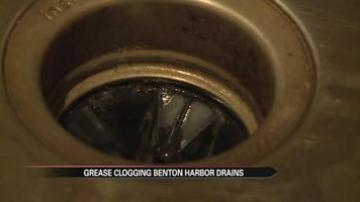 BENTON HARBOR, Mich. -- Cooking grease is clogging drains and now sewer problems are plaguing the city of Benton Harbor. The city says it is a problem that becomes increasingly more difficult to fix during the winter.

ABC 57 talked with a plumber to get a better understanding of exactly how this works.

In a pot of meat and potatoes a little grease goes a long way.

But experts say, pour it down the drain, and the only place it will get you is on the phone with a plumber.

"It’ll stick to your drain pipes in your house which over time will cost you some money," explained Tim Ulrich with Town & Country Plumbing Services.

Once the hot grease hits the cool water in pipes it turns into a solid, backing up drains.

"It adds up, and what little bit you do send down the drain we always recommend you run lots of hot water with it, that will keep it in the liquid state for as long as possible," Ulrich advised.

He says the same thing happens on a larger scale.

If every household pours grease down their sink, it ultimately ends up in city pipes and causes the whole city to have sewer issues.

"I know Benton Harbor has been having that problem, I’ve seen their machines, they are jetting out the man holes quite often right now," said Ulrich.

It is not a cheap or easy process.

Ulrich says every drop of grease, shortening, and oil counts.

"The less you put down there the more money you are going to save in the long run."

He says to save you and the city money, instead of the sink, simply throw used oil and grease in the trash.
Share this article: