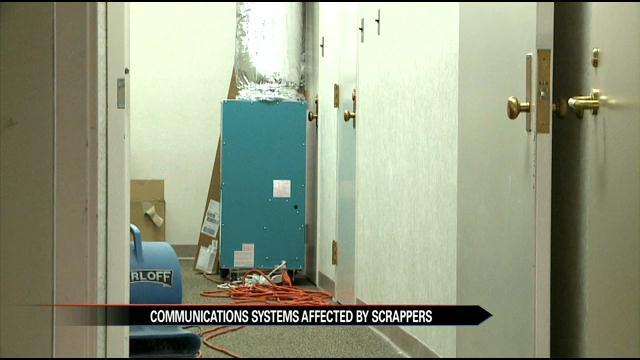 Someone stole the copper tubing from air conditioning units at the Elkhart County office building. Without the cool air, computer servers overheated, shut down and affected communication throughout several county offices.

The amount of copper stolen was valued at less than $50 but caused thousands of dollars worth of damage.

The two AC units are 15 tons and cool just the server room of the county office building.

Copper tubing is essential for the units to cool and without that, computers throughout the entire building had to be shut down.

The shut down affected about 14 different departments that spanned across four to five office buildings.

Additionally part of the Elkhart County Sheriff's Department phone lines and email access were limited but those services were restored before 5 p.m.

Elkhart County Administrator Tom Byers says they rely heavily on technology and without it, their ability to use technology was limited.

“You realize what you're relying on to do your job is stored in these computer servers somewhere, and that gets to be a problem. Add to the fact of that, how do you communicate with people today? The majority of that is through email,” said Byers.

He also said he was not sure at this time if this shut down would cause any damage done to the internal data.

By about 3:35 p.m. one AC unit was running again as well as phone lines and computers in the building.

Officers are still investigating this theft.