Could I-94 pileup have been prevented? 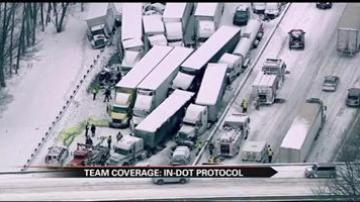 MICHIGAN CITY, Ind. -- The Indiana State Police and INDOT held a press conference Friday morning about the massive pileup on I-94 Thursday night that killed 3 people and injured over 20. According to INDOT, weather conditions deteriorated too quickly to do anything to prevent the crashes.

The three victims have been identified as Marylyn and Thomas Wolma of Grand Rapids, husband and wife, and Jerry Dalrymple -of Chicago.

The accident involved 46 vehicles, including 18 semis.

Police say the extreme weather Thursday was the likely cause of the massive pileup, but that the investigation is ongoing.

Many wondered if the road should have been shut down, which might have prevented the tragedy.

INDOT says they did everything they could.

"We had Crews on 94 the entire day. Our crews had just gone through there 20 minutes before the accident, salting and plowing," said Matt Deitchley of INDOT.

There were never any plans to close I-94.

"There wasn't any talk of closing roads simply because the whiteout conditions weren't warranting it at that time," said Deitchley.

But in a matter of seconds, conditions took a turn for the worse.