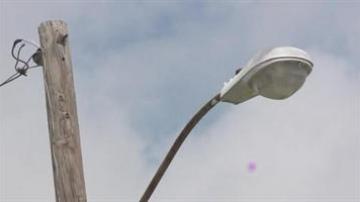 On Linden Avenue, there's one light, but it doesn't belong to the city.

Residents have come to depend on it but know it's not enough to cast away criminals.

"A lot of break-ins, a lot of shootings, a lot of fighting," said Aries Gilliam.

Michael Taylor has been charged with his murder.

Aries says extra street lights may not have saved her father, but they would go a long way in turning the neighborhood around.

She says her family has asked for them before, but never got them.

Gail Brodie, the President of LaSalle Park Neighborhood Association, has been working on getting street lights in her neighborhood for a long time.

"The city has known about this for a long, long time," said Brodie.

Determined to keep the issue from burning out, she sought the help of her fellow neighbors and kept on calling city leaders until they finally listened.

Brodie's neighborhood is the first of two selected for the 'Light Up South Bend' program and she couldn't be happier.

In the next few weeks, dozens of new street lights will light up LaSalle and Keller parks.

They have about $50,000 more budgeted and are asking any residents who would like lights in their neighborhood to call 311.