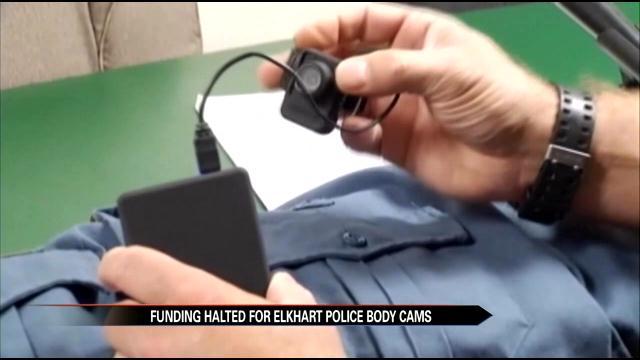 Headlines continue to emerge and tell the story of deadly police shootings. More and more police department across the county are investing in body or vest cameras. Now this topic is on the table once again in a Michiana city.

Last night at an Elkhart common council meeting, funding intended for the Elkhart Police Department to use for body cameras, was voted down.

Henke referred to a video from the Evansville Police Department. The footage was taken on the same vest cameras the Elkhart Police Department would purchase. The image is shaky and an officer's arm blocks the camera's view. Henke says the footage makes him more apprehensive about moving forward with body cameras in Elkhart.

“There are so many questions out there and I believe the council did the right thing in deciding let's not jump off the cliff and decide later how long of a drop we have,” says Henke.

Tonda Hines who was apart of the three who voted for the vest camera funding, believes it is now or never.

“The need is now. It's not going to go away. Change happens with time and more and more areas are going to those (cams) and so it is another tool for our officers to have,” says Hines.

Hines believes the six 'no' votes will only delay real progress.

“I think technology moves faster than government legislation. So I think for some of those legality questions, I don't know that those will be all answered right way,” says Hines.

Sergeant Chris Snyder with the Elkhart Police Department has a similar opinion.

And as time goes by more videos of police/civilian violence could surface, but Henke still believes taking the time to think a decision through is the best option.

”Now this was a pretty expensive suggestion from the mayor's office and I believe this was more reactionary. These are huge costs that if you get into this business and rules are yet to be written you take a huge gamble,” explains Henke.

The body camera ordinance for the police department is on hold.

Mayor Moore will put forward a new ordinance and the community is welcomed to voice their opinion at future common council meetings.

Hines also says the community can contact any of the nine council members because this is a city wide issue not concentrated to one area of Elkhart.
Share this article: