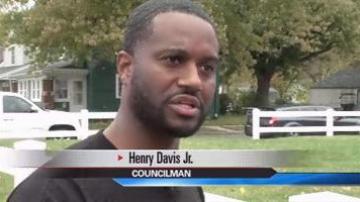 SOUTH BEND, Ind. -- A South Bend common councilman was pulled over and ticketed by police and his father was arrested Monday evening.

Henry Davis Jr, says he was driving home on Western Avenue after the Common Council meeting Monday night when he noticed a South Bend Police cruiser in his blind spot as he approached Falcon Street.

"The curb is out several feet into the street; so it was either me run the curb or get over,” said Councilman Henry Davis Jr.

Davis says he didn't think the police cruiser on his left was going to move so he signaled his intention to switch lanes.

According to Davis, it was a few blocks later when the officer tried to pull him over, but he didn't feel safe doing so immediately.

"I waited till I got to a well lit area to pull over,” said Davis.

He pulled over by several fast food restaurants near Mayflower Road.

"They told me to get out over the loudspeaker with my hands up. So I did what they asked me to do. When I get out every weapon is drawn on me," said Davis. "I'm nervous. I'm scared. I'd don't know if I am going to be able to go home and see my four year old son again, or my wife."

According to Davis, the officers took him and his father, who was in another car, into custody.

"They handcuffed me and they asked me if I had been drinking, I tell them no. They ask me where I had been, I tell them that I had been down at the South Bend Common Council Meeting serving my city," said Davis. "Then they say they want to arrest me for resisting arrest, and I began to ask them why are you even pulling me over?"

Whatever their reasons, officers took the cuffs off of Davis and let him go.

His father, Henry Davis Sr. was taken to jail on a reckless driving charge. He bonded out 45 minutes later.

Davis was ticketed for failure to yield, no light on his license plate and not using a turn signal.

We asked the South Bend Police Department for video of the encounter between officers and Davis, but the department is not releasing the video yet.

“The traffic incident that happened Monday night involving Council Member Henry Davis, Jr. and his father is unfortunate, and it is an unwelcome distraction at a time when elected leaders are hard at work on major issues. To our knowledge, the officers of the South Bend Police Department acted with professionalism and followed proper police procedures. The details of these cases will be reviewed and handled by the St. Joseph County Prosecutor's Office. Everyone, including elected officials, should respect the law, and everyone must be treated fairly and equally.”