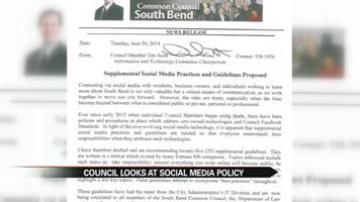 Tuesday, council member Tim Scott released a rough draft of his proposed social media guidelines he plans to present to the council.  He hopes this will start a conversation about what is and isn't appropriate as a representative of the city.

This is in response to a picture Henry Davis Junior posted on his Facebook page of a man engaging in bestiality.

According to Scott's proposed guidelines, the picture would have been in violation of Recommended Practice and Guideline #3 that states to never post any photo or image that would be considered obscene.

In Scott's latest version of the guidelines, there are 25 recommended guidelines following similar ethics and procedures.

Scott says these guidelines can turn this five month ordeal, into a positive learning experience.

He hopes they can help the council get back on track and be able to handle more important city issues.

"Let's just get this in, so everybody can understand what they should be doing, so we can go about worrying about what's going on with the city and issues that are out there," said Scott.