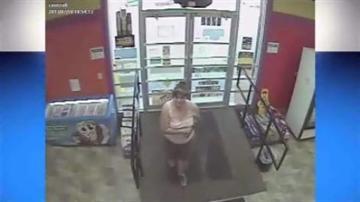 SOUTH BEND, Ind. -- South Bend Police say counterfeit bills have shown up at three stores in South Bend in the past week - at the Smoke Shop, Little Caesar’s and Low Bob’s.

Surveillance pictures from the Smoke Shop shows a woman trying to use a fake $100 bill to buy a pack of cigarettes.

The store manager said the bill passed the pen test.

"The first thing we look at is the foil stamp. It reflects in the light and if that thing does not reflect immediately when we pick it up, that's the first red flag,” said Dean Snyder, Manager of the Smoke Shop.

She left in an older Ford Explorer.

“Apparently this gal was not only slightly handicapped, but they are preying on people's feelings and sympathy. I just think that's really bottom of the barrel,” said Snyder.

Snyder said the bill looked spliced and it was very worn.

“The third one was a bleached $10 bill made to look like a $100 bill," said Trent. "They bleach off the ink, then use that piece of currency paper for their new bill which will now be a 100 dollar bill rather than a ten so it will pass one of those cashiers pen test that you see people at cash registers perform on a bill to make sure it's legitimate."

The other two bills were photocopied, according to Trent.

Click here to learn how to detect counterfeit money.