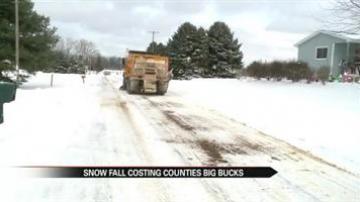 ST. JOSEPH COUNTY, Ind. -- The back to back snowstorms are costing cities and counties a lot of money on snow removal-related expenses. Many counties are worried they will run out of money before winter is over.

"Budgetary wise we're concerned already, we committed for so much salt, again we've used more salt this year, already than we did through probably most of the winter last year," said Denny Long of the Goshen Streets Department on December 17.

The snow storms can cost counties thousands of dollars.

In Fulton County, their highway department says when they add up gas, truck repairs, overtime and salt, they spend about $20,000 a day.

"For this year we had committed to about 6,000 tons and we've actually purchased our 7,200 tons so far this year. And if we need to we will look at purchasing additional materials," said Clark.

Because the governor declared a state of emergency in 29 Indiana counties, counties can be reimbursed for the cost of the storm cleanup.

Mayor Dick Moore announced today that the City of Elkhart has compiled and sent to the Indiana Department of Homeland security the cost of managing the cleanup of the recent snowstorm. Eight departments were involved. The listing included labor cost, overtime costs, equipment costs and the cost of deicing materials as well. The costs were recorded by the departments and the filing was done by the City’s Grant Department. The total cost of the cleanup was $179,074.