Counties spending millions to keep up with snow 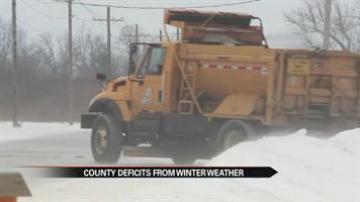 BERRIEN COUNTY, Mich. -- It will cost some Michiana counties millions of dollars to keep up with all the snowfall this winter. Last year Berrien County spent about $700,000 from October 1 to January 31. This year they spent almost $2 million.

So far this winter, Berrien County's Road Commission has spent $1.8 million to plow and salt the roads - and winter isn't over yet.

"You never know how your winter is going to be. We budget the end of our fiscal year is September 30 and we make our projections based upon an average winter this is obviously been more difficult," said Louis Csokasy, Managing Director of the Berrien County Road Commission.

The costs are made up of salt, sand, fuel and overtime expenses starting from October 1st.

As if that isn't enough, the cost of repairs to plow and salt trucks in Berrien County has also gone up because they are out on routes more often this year.

"So far today we've had one blown engine and three blown transmissions. Our fleet is a little aged and the working conditions that our trucks go through is harsh," said Csokasy.

Csokasy says there are two elements that have made this winter so harsh. The high winds have caused snow to drift.

"We spend an inordinate amount of time going back over the same route over and over again to keep it clear," said Csokasy.

The second is how often it has snowed, making for extra trips for plow drivers.