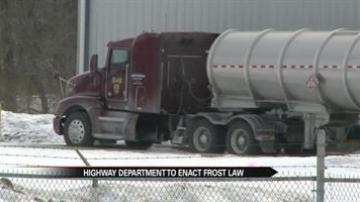 ST. JOSEPH COUNTY, Ind. -- Engineers in St. Joseph County are working on a seasonal weight ordinance that would affect big rigs. The ordinance, sometimes referred to as the frost law, would prevents vehicles over 8 tons from traveling on certain roads.

The public works department is still figuring out which roads would be impacted, then they must get approval from county commissioners.

Once approved, it could go into effect as soon as March 10.

This year's brutal winter is putting holes not only in roads, but the county's budget.

Certain roads would be restricted to trucks weighing more than 8 tons.

"We're looking into roadways that we've invested money in and keep them in a good condition for this temporary time period during that freeze/thaw," said Clark.

County engineers are evaluating parts of Ironwood and Adams, but there will be restrictions all over the county.

With the exception of buses and trash trucks, vehicles found breaking the ordinance will be subject to a fine of up to $500.

County commissioners will vote on whether to enact the ordinance at a March 4th meeting.

If they do decide to move forward, restrictions will likely last until mid-to-late April.