Couple charged with neglect could get plea deal 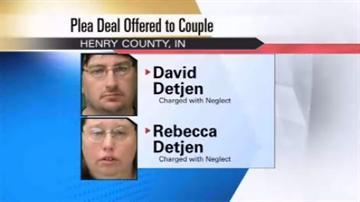 David and Rebecca Detjen were arrested last November after Indiana police found five of their seven children inside the back of an unheated box truck.

The couple said they were moving from Pennsylvania to California.

They both pleaded not guilty to a single count of felony neglect.

The prosecutor says he will offer them a deal to plead guilty to one of the neglect charges.