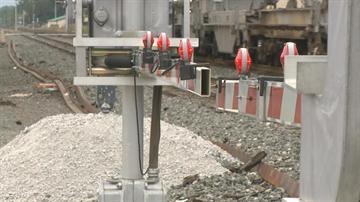 LA PORTE, Ind. -- There was a deadly design flaw at some Michiana railroad crossings. A La Porte man and his wife were trying to cross some railroad tracks near Tyler and Washington Streets in La Porte when the gates suddenly went down, trapping them on the tracks as a train came barreling towards them.

The couple followed the rules, and so have many other people. Yet La Porte City Engineer Dale Clingerman said this very same situation has happened 20 times in the last two years and 15 of those instances happened this year alone.

So what's the issue? Clingerman said it is a faulty design.

"If there is a car-train collision, I can tell you who is going to win -- the train," said Clingerman. "Even though several people have gotten stuck on the tracks, there hasn't been an accident until now."

"The problem occurs when there is a train coming the other direction that is just delayed enough that the first train has trigger the gates to come up," said Clingerman.

He said the timing has to be just right, but it is happening more and more. If the gates are not completely upright before the second train hits the switch that said its entering the crossing, the gates don't have time to reset and, therefore, don't know what to do. So, the gates, instead, just immediately come back down. That causes drivers, who think the coast is clear, to get stuck on the tracks.

That is exactly what happened three weeks ago. A car driving south on Tyler Street, started crossing over the railroad tracks when the gates suddenly came down. The car was on the tracks as a train headed straight at it. The couple inside the car were forced to bail out of the car just seconds before the train plowed through the intersection.

"It was complete panic. We didn't have time to think," said Linda Matz.

The couple was driving home from the grocery store when their night took an unexpected turn.

When Thomas and his wife look back, they saw the train strike the back of their Chevy Cavalier. The car was a total loss. "Just the end of the car got complete torn off, the inside of the trunk was fine," said Linda Matz. "It is traumatizing. I personally don't want to ever cross the same railroad tracks".

Of the several people to get trapped those same railroad tracks, this is the first accident to occur because of it. That is why the city contact INDOT, who, in turn, worked with the railroad to reprogram the gates so that they take longer to go up after a train has passed by.

Clingerman said there is something every driver can do if they find themselves in the same position. He said to just drive through the gates because they are made to give way. He also advises drivers to remember that it is against the law to go over the tracks before the gates are completely up and the lights have turned off.