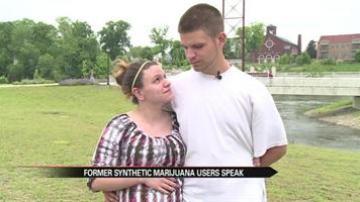 ELKHART, Ind. -- A local doctor says a lot of people believe synthetic marijuana isn't dangerous, but he says the effects are extremely dangerous. He has seen young adults rushed to the emergency room because of heart problems, seizures and paranoia.

A local couple says they were addicted to synthetic marijuana for several years. They said they didn't believe it was as dangerous as real marijuana, but it didn't take them long to realize it was a completely different beast.

"Your heart's beating, your adrenaline's rushing and then you just like hit a brick wall or something. Everything just stops and slows down," said former addict Brandon Brunner.

That's how Brunner felt when he was high on synthetic marijuana.

"It'll get real, real quiet and all you can hear and feel is your heartbeat inside your chest. You can feel the vibrations in your throat, you can hear it in your head," said Brunner.

Brunner says when he began smoking synthetic marijuana, everything started falling apart in his life.

"That's all I cared about," said Brunner.

He lost is family, his friends, and racked up thousands of dollars in medical bills for trips to the emergency room.

"In debt up to $7,000 with the hospital because of how many times I've had to go. I had a month where I went two or three times a week every week straight," said Brunner.

Brunner says the drug made him so dehydrated, he couldn't keep anything down.

His fiance was also addicted to synthetic marijuana, until she found out she was pregnant.

"That's what really scared me about it because you really don't know what's in it. You throw up your insides and you just don't know what it's going to do to a developing baby," said former addict Jessica Ricketts.

For Brunner and Ricketts it was this baby bump that made them get clean, but the say that's not always enough.

"I really hope that they all get shut down and stay shut down because a lot of people don't have the will power to quit on their own," said Brunner.

This couple says they've experienced it first hand, either you quit the drug, or the drug runs you into the ground.