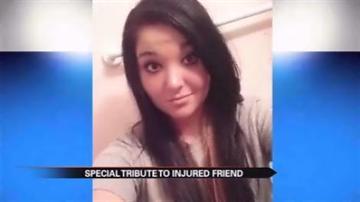 Two weeks ago, 15-year-old Courtney DeMont was seriously injured when the Jeep she was riding in flipped several times in Argos. Courtney’s friends wrote a song for her and now they’re selling a CD to raise some money for her family and her long recovery.

Courtney is still in a coma at Memorial Hospital.

"It was really bad. There was a lot of crying,” said Matt Milliser.

"We had had a fight about a month before the accident and I never got to apologize to her and I just feel horrible,” said Richii Zieber.

Zieber spent the next 40 hours after the accident trying to make sense of what happened.

The result is Courtney's Song.

“I still love her to death and the best way we can show that is through our music,” said Zieber.

Zieber worked with Millisner to complete the lyrics and asked his dad, Jim Zieber to help with guitar accents.

As a family familiar with personal tragedy, Jim was more than willing to help.

"His mother died in 2009 so we were already close, but when he came to me and said, ‘Dad, I wrote this song for Courtney can you help me?’ I'm like, ‘Absolutely, let’s do this,’" said Jim.

Together they produced a CD they're now selling. All proceeds are going to Courtney's family.

"Everything we're doing, everything is for Courtney and about Courtney. Every dime other than what it costs to produce is going to the family,” said Jim.

Courtney's recovery time is uncertain, but they are confident that soon, they won’t be singing about her – they’ll be singing with her.

"She said at a softball game, ‘I don't apply to the odds, I defy them.’ Or something like that and she's certainly proven that,” said Richii Zieber.

To order a CD you can email courtneyssong@outlook.com or text or call 574-214-2125. The CD is $8 if you pick it up or $12 shipped. It’s also $8 for the MP3 version. They take cash, check and credit card. All proceeds go to the Courtney DeMont family.

There is also a concert on July 13 at the Plymouth Parks Amphitheater. Tickets are $10. Sponsorships for local businesses are still available.