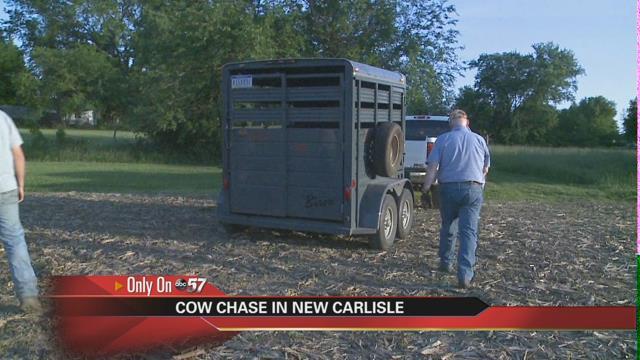 A cow spent hours on the move in New Carlisle Tuesday night. Animal Control was called out to State Road 2 and Timothy Road after the cow escaped her yard and roamed the streets for several hours.

Tuesday night New Carlisle was a community filled with commotion and neighbor helping neighbor was taken to new heights.

“I know she come from that way and all of a sudden the police and the other people came,” says Robert Taylor.

He believes the cow just got scared.

“I think there was too many people around spooked her she ran across this way pack into the field,” says Taylor.

New Carlisle Police and the St. Joseph County Sheriff's Department were on the scene and called in New Prairie Veterinarian Service for some back up.

“We were able to get a shot through the fence line to get her sedated and she ran for another five to ten minutes and laid down then got her lassoed and loaded,” says Larry Smith, New Prairie Veterinarian Service.

No one including the cow was hurt during the chase. She returned safely to her yard and the sedation was said to last about an hour.