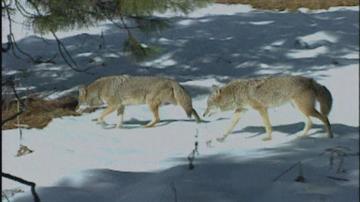 SOUTH BEND, Ind. – Coyotes in the middle of South Bend?  It’s more likely than you might think.  Several residents in the Sunnymede neighborhood reported that their pets have been attacked by a pack of three coyotes earlier this week mainly along Longfellow Avenue.

In 25 years living in Sunnymede, Horvath said she’s never even heard of coyotes being spotted there.

"I would suspect it out in the country, but around here this is a built up neighborhood it’s not really rural at all,” Horvath explained.

After hearing of the attacks, Horvath has started to worry about her pet dachshund.

“Kind of concerned about letting him out as well as children, I don’t know if there’s really a need to be afraid with little children as well,” she described.

“They’re relatively a safe animal, they’re more afraid of us,” explained First Sergeant Mark Hines with the Indiana DNR.  “They will get in close, but they should not pose a threat if you don’t threaten them.”

Sgt. Hines explained that it’s becoming more and more common across Indiana for coyotes to be found in more developed areas.

“It wouldn’t be unusual to find one here in town,” Sgt. Hines explained.  “Coyote’s one of our most adaptable animals that we have, so he’ll come in here because there’s something in here for him to eat.”

The coyote’s ability to adapt to new environments means they may be able to live within cities in heavy shrub areas or even abandoned buildings, according to Sgt. Hines.  Around railroad tracks that cross through the Sunnymede neighborhood there’s dense brush that Hines believes would suit coyotes.  So, what do resident’s need to do to protect their animals?

“If they’re out loose and you see a coyote you want to bring them in,” advised Sgt. Hines.

He also described coyotes as opportunists, leaving pet’s food outside or leaving garbage cans unsecured could attract them.  If attacks continue, the DNR could take steps to help residents.

"In this case here we'd probably recommend them to a nuisance animal control person that could come in and hopefully be able to trap them,” Sgt. Hines explained.

The Indiana Department of Natural Resources has a webpage to help people live alongside nuisance animals, you can find it here: www.in.gov/dnr/fishwild/2351.htm