Coyotes could pose a danger to animals 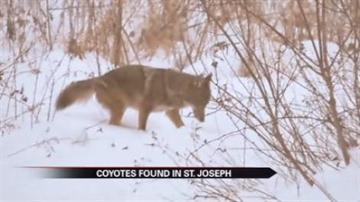 BERRIEN COUNTY, Mich. -- Animal control experts want residents to be on the lookout for coyotes. In St. Joseph, Michigan, coyotes are a pretty common sight, and right now they are hungry and many have extra mouths to feed.

Randy Schrubba moved into his home in St Joseph Michigan about six years ago.

Since then he has seen coyotes lurking about.

"We've seen them every year. Every winter I've seen them out here; like today, I saw one today while walking the dog,” said Schrubba.

Schrubba says he saw the coyote as he came around the corner. It was about the size of a large dog and ran off into the woods.

He has taken pictures of the coyotes in his back yard in the past.

"These are mommas and they have young; and what they are doing now is they're hunting for their young to take it back to the litter,” said Val Grimes, Director of Berrien County Animal Control.

Why are they so close to the city?

They've lost their habitat. Humans have moved in and created a golf course.

"Harbor Shores, where it is a wonderful project and it's wonderful for our folks; it's taken out a whole lot of wildlife rehab places for them to be,” said Grimes.

It has pushed the coyotes into the city and surrounding areas.

"They are very suburban and they learn in a hurry how to deal with people,” said Grimes.

The more they are around people, the less they fear them – and the bolder they get in targeting small dogs and cats.

"If you have them on a leash, where they should be, you're going to be fine. But if you just turn those kitties out, they're going to get snatched, there's no doubt about that,” said Grimes.

"I'm not concerned about coyotes because I know as soon as they see a person, they run away,” said Schrubba.

Grimes says the threat is not just to pets, they could go after a toddler.

Grimes says there have been no reports of coyotes going after a child in Indiana.