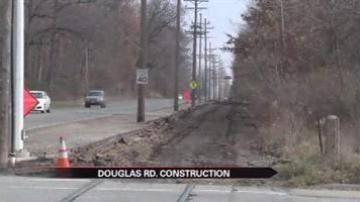 SOUTH BEND, Ind. -- Traffic has been backed up for weeks on Douglas Road between Juniper and State Road 933 because crews are removing the old railroad tracks.

“We are picking up the rail and fixing the crossings, we're laying asphalt,” said worker Robert Roth.

The train tracks are owned by Norfolk Southern Railway Company.

At one time, the tracks were essential because they carried coal to Notre Dame’s power plant.

But now that Notre Dame uses trucks to transport coal, the railway hasn’t been used in years.

The construction company says it won't take them long to finish removing all the tracks.

“Probably a month, hopefully a month if the weather works out,” said Roth.

But this is just one portion of the line. The railroad is over three and a half miles long.

Tracks also stretch along Angela Boulevard and through some South Bend neighborhoods on the west side.

Workers say the entire removal process could take up to a year.

“No, no one's been complaining which is good,” said Roth.