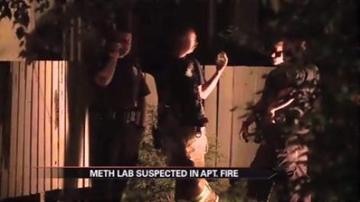 ELKHART, Ind. — Crews rushed to a fire at an apartment complex in Elkhart early Thursday morning. Elkhart Police are conducting a criminal investigation into the fire.

"Around 130 in the morning, Elkhart Fire Department was dispatched to the Ridgewood Apartments off of Hively Avenue in Elkhart,” said Lieutenant Michael Sigsbee of the Elkhart Police Department.

Dwight Campbell, who lives next door to the burning apartment, was just getting home and noticed the smoke.

"Upon entering the apartment they found what they believed to be a meth lab,” said Sigsbee.

The fire was quickly put out.

The state police meth suppression unit was called in and the search began for the suspect.

He was said to be at an address on Independence Street in Elkhart.

"We went to that address, talked to the homeowner got consent to search for the subject, didn't find the subject, but we did find methamphetamine production materials in the trash,” said Sigsbee.

The man who was believed to have been in the apartment at the time of the fire was located in a house on Jackson Place.

"At that time he had sustained some injuries so he was transported to Elkhart General Hospital,” said Sigsbee.

The man suffered burns to both his hands and feet.

According to management at the apartment complex, the man police apprehended is not the same person who is on the lease.