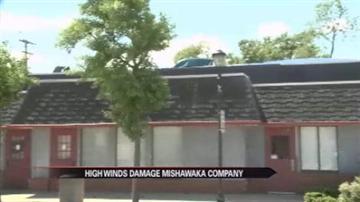 One of the casualties of the storm was the roof of JPD Controls on Mishawaka Avenue.

The roof flew off the building and landed in the street.

He recorded the incident on his cell phone just before 10 p.m. Wednesday.

Mishawaka Police and Fire blocked off Mishawaka Avenue between Sarah and Main streets for over two hours.

"The debris, it went everywhere. All over the street- over to this business. I had chunks in my car,” said Cheatham.

The company is not officially closing. Its owners are just looking for a new building to relocate the main assembly line.

Workers now must remove the standing water that fills the 2500 square foot building and move materials outside to dry off.

The streets department used a front-loader to shovel the debris of the roof away, but only after many cars unknowingly drove right into it.

"I seen two trucks run over it and a car tried. That didn't work out. They ended up being the ones that called the police,” said Cheatham.

Police opened the road back up just before midnight.

Debris is still on the sidewalk.

Mishawaka Fire said they were very busy Wednesday night responding to reports of storm damage, but the roof cleanup took the largest chunk of their time.

The CEO of the company said they're drying everything out, assessing the damage, but it’s too soon to tell if insurance will cover everything.