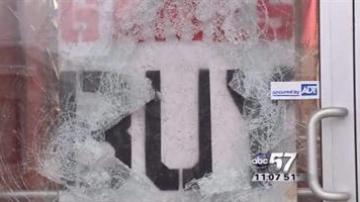 La Rosita Ice Cream Parlor was robbed on Nov. 6 around 8 p.m. when two men came into the store and stole the tip jar off the counter.

The owners said the employee on duty was in the back when the robbers entered the store, but the owners saw the men steal the jar on the video camera survelence cameras.

"I was upstairs when they came in and I saw them through the video cameras. I rushed downstairs to stop them but they were gone," said Mrs. Cervera.

The Cerveras said they called the police and asked for a translator because they're not comfortable with their English.

The Cerveras said they have seen suspicious activity at two of the other stores that were robbed.

They saw a man loitering outside of Little Denmark- the adult gift store that was robbed at gunpoint on Nov. 7 at 2 p.m.- at 1 a.m. the morning of the robbery.

They said they also witnessed the break-in across the street at Gamer- the video game store that has been robbed a total of 4 times, the most recent was just a week ago on Oct. 31.

The Cerveras heard glass breaking and a witnessed a man throw a rock through the door of Gamer. The man then jumped through the hole in the broken door, but quickly dove out when the alarm went off.

In addition to these three robberies, Aguillera's Tacos and La Paneria down the street have also been robbed.

Police arrested two men on Nov. 7. The Cerveras saw the two men enter their ice cream parlor and called police before chasing them down and handing them over to police.