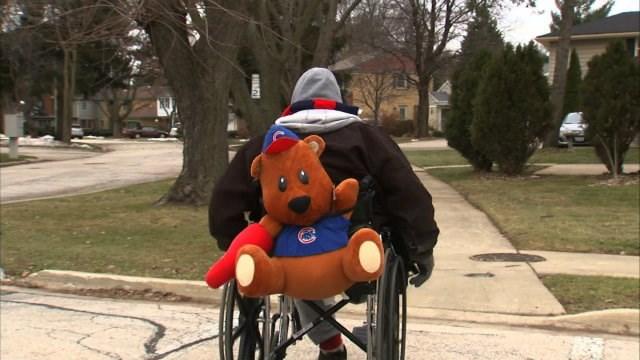 Palatine, IL -- A devastating accident took Dennis Schulze's leg and almost took his life. The survivor and lifelong Cubs fan is now traveling from Beloit, Wis., to Wrigley Field under his own power to raise money for five charities.

Schulze thought it was only appropriate for Wrigley Field to be the final stop on the 100-mile journey. Logging about 10 miles a day, ABC 7 Eyewitness News caught up with Schulze on Rte. 14 in northwest suburban Palatine.

Schulze, 55, navigates his way through the dirty snow and over-complicated corners using his left foot and two arms.

"There is always somebody worse off than I am, you know, so that's the reason I do it - to put myself to the challenge," he said.

The former truck driver has been challenged ever since he lost part of his leg in a horrific crash four years ago on the Borman Expressway. Schulze was given a 40 percent change to live; strong will and a big heart pulled him through then and are still pulling him through as he travels 100 miles in the dead of winter to raise money for five causes that have touched him personally.

"One is Alzheimer's, in memory of my dad. I lost him the day they cut my knee off," Schulze said.

Another is for cancer, the disease that killed his mother. March of Dimes, Wounded Warrior Project and a child abuse prevention charity are included in his wheelchair walk fundraiser.

"I have a slogan. They asked me to make up one, and it's, 'Let's all pull together for those who can't walk together,'" he said.

While he planned on traveling alone, Schulze had a seizure before he left so his good friend Joan Sohn insisted on following in a car.

"I'm in awe right now. And he's got a big heart. I'm thankful I was allowed to come along," Sohn said.

With a couple more days to go, Sohn and Schulze said their journey has brought out kindness in others as well. Today, one woman brought them lunch.

"People say there is bad in the world. That's wrong," Schulze said.

The goal is to reach Wrigley Field by Thursday morning. Schulze said for the last mile he plans to use his prosthetic leg so he can walk to the ballpark. As for his fundraising, Schulze does not accept cash along his journey. To contribute, visit his Facebook page for Dennis's Journey and follow links to his chosen charities to donate.