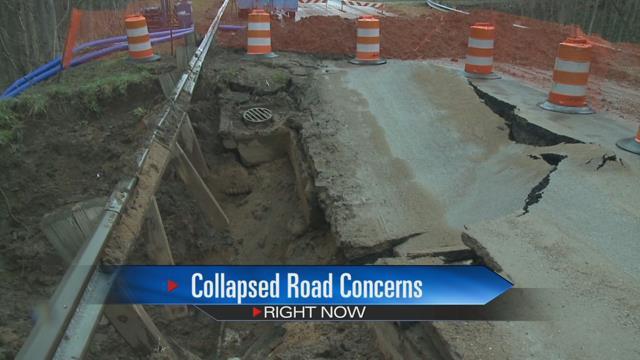 A major road collapse in Berrien County has many concerned about more than just detours.

A section of Territorial Road in Millburg collapsed due to a rusted culvert.

“I never expected anything like that to ever happen but you know, it did,” Anna Yates, a neighbor in the area said.

Yates says the sight of the sinkhole frightened her.

“It could happen to anybody and somebody could get hurt bad,” Yates said.

No one got hurt when the section of territorial road collapsed Tuesday, but travelers are now taking detours.

It could be months before it’s fixed.

“My past experience with this would say that road could be closed for months as we go through this,” said Louis Csokasy, managing director of the Berrien County Road Commission.

He says the culvert under the road is too old to function properly.

“Many of these culverts were put in the forties and the fifties, and they’re made out of steel so what happens is they rust,” Csokasy said.

The road commission first noticed a crack in the road Saturday and blocked it off.

Tuesday, the culvert finally collapsed, bringing part of the road down with it.

The county is currently pumping water through to keep more water accumulation, but a permanent fix takes longer.

According to Csokasy, there’s a possibility of this happening somewhere else in the county.

He says there’s hundreds of culverts and bridges in the area, but a lack of funding to maintain them.

“To be honest with you, it’s just going to happen. The state has increased their funding but they’re not getting full funding until 2021. Well, I’ve got a problem today,” Csokasy said.

While he prepares for a fix that could get complicated and expensive, he’s losing sleep over dozens of other areas he knows need updates.

Now more than ever, she’s taking precaution on the roads.

The stretch of road isn’t technically a bridge, which is why the culvert is there to help the creek flow underneath it.

Csokasy says the Berrien County Road Commission explored the option of turning it into a bridge 11 years ago, but it would have caused a huge deficit for the county.

Therefore, without the funds for a bridge, they had to patch the original culvert.

That path was set to last 11 years.