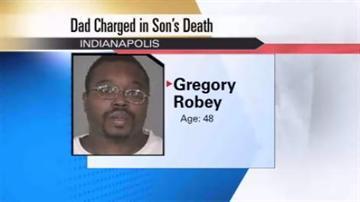 INDIANAPOLIS. -- The father of a malnourished infant who died in November is facing charges related to the baby's death.

Gregory Robey, of Indianapolis, the father of three-month-old Phillip, was arrested on charges of murder and neglect.

Phillip was so malnourished at the time of his death that he only weighed five pounds which was less than his birth weight.

The baby's mother was charged earlier with murder.