The images of all the damage from the likely tornado in Wilkes-Barre Township are just incredible. It really is amazing there are only reports of some bumps and bruises, no serious injuries. pic.twitter.com/PEEXXjZMz7

The images seen just outside of downtown Wilkes-Barre show the destruction caused by a strong EF-2 tornado that moved through the region Wednesday evening. Many buildings sustained considerable damage. That includes Panera Bread, Dick's Sporting Goods, U-Haul, Nissan, Barnes & Noble, and many others. Some buildings saw partial roof collapses and were effectively destroyed. Cars and trucks were rolled, tossed and flipped over in and near the shopping plaza. Despite the tornado packing winds upwards of 130 MPH and moving through at night, there were no serious injuries or deaths. The tornado is only responsible for six minor injuries, none of which required hospitalization. 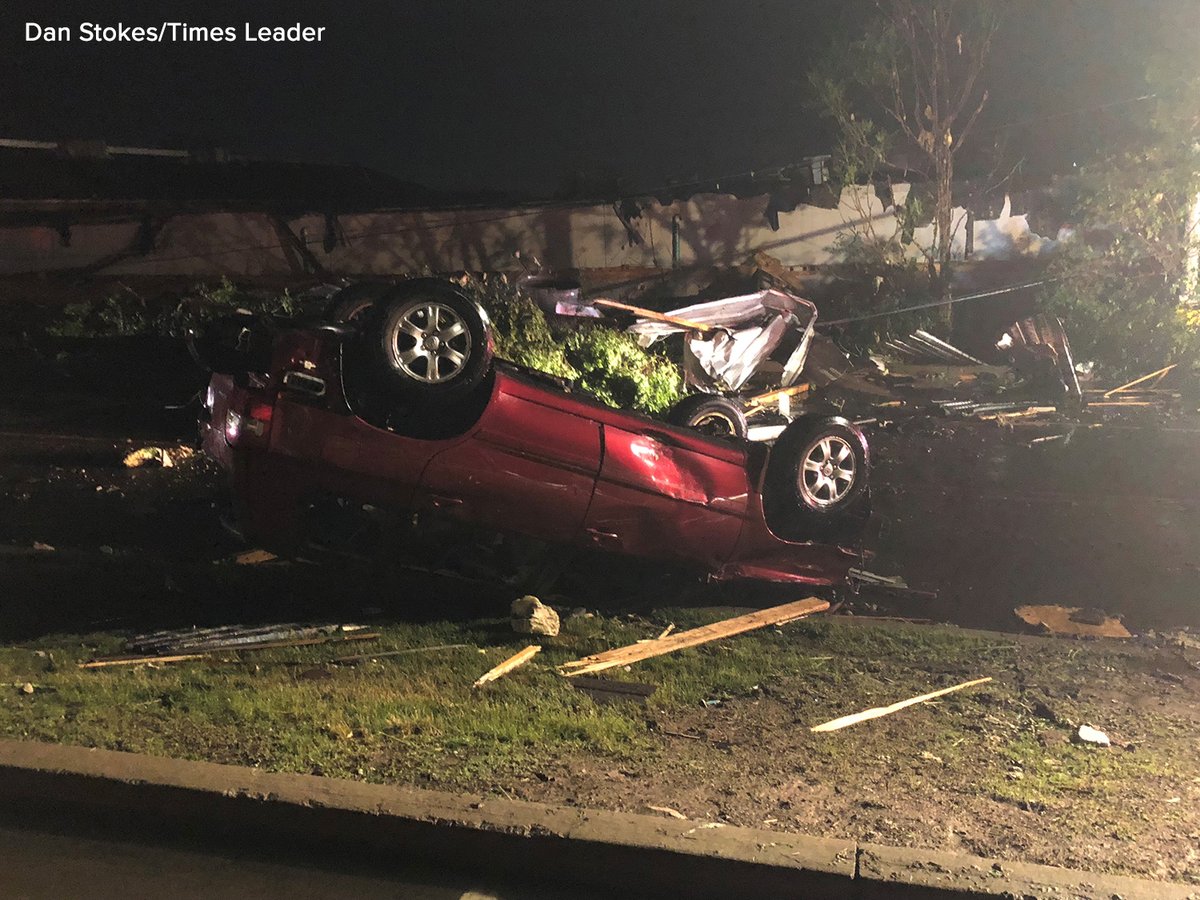 ABC News
The tornado was on the ground for three-quarters of a mile and was 200 yards wide at its strongest. It will go down as the strongest tornado to ever strike Luzerne County, which is where Wilkes-Barre resides. 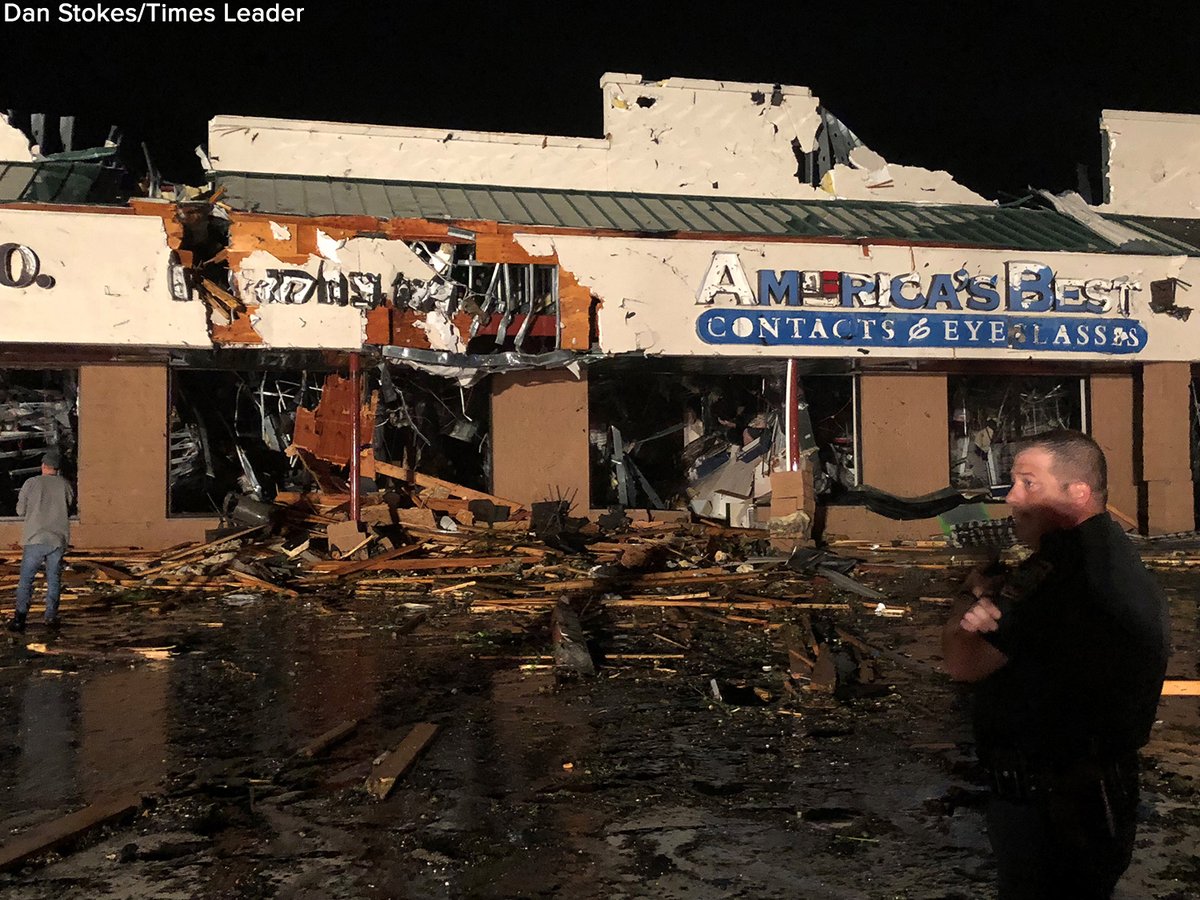 ABC News
The twister was one of two confirmed tornadoes in northeast Pennsylvania from Wednesday evening's thunderstorms. Despite the large amounts of damage caused, the overall tornado risk on Wednesday was minuscule in Pennsylvania according to the Storm Prediction Center. The same can be said about the three tornadoes that touched down between June 9th and 12th in Indiana. The overall tornado threat was deemed very low to borderline non-existent. However, tornadoes still developed. Therefore, it's always a good idea to treat all thunderstorms severe and dangerous in order to be prepared for anything. 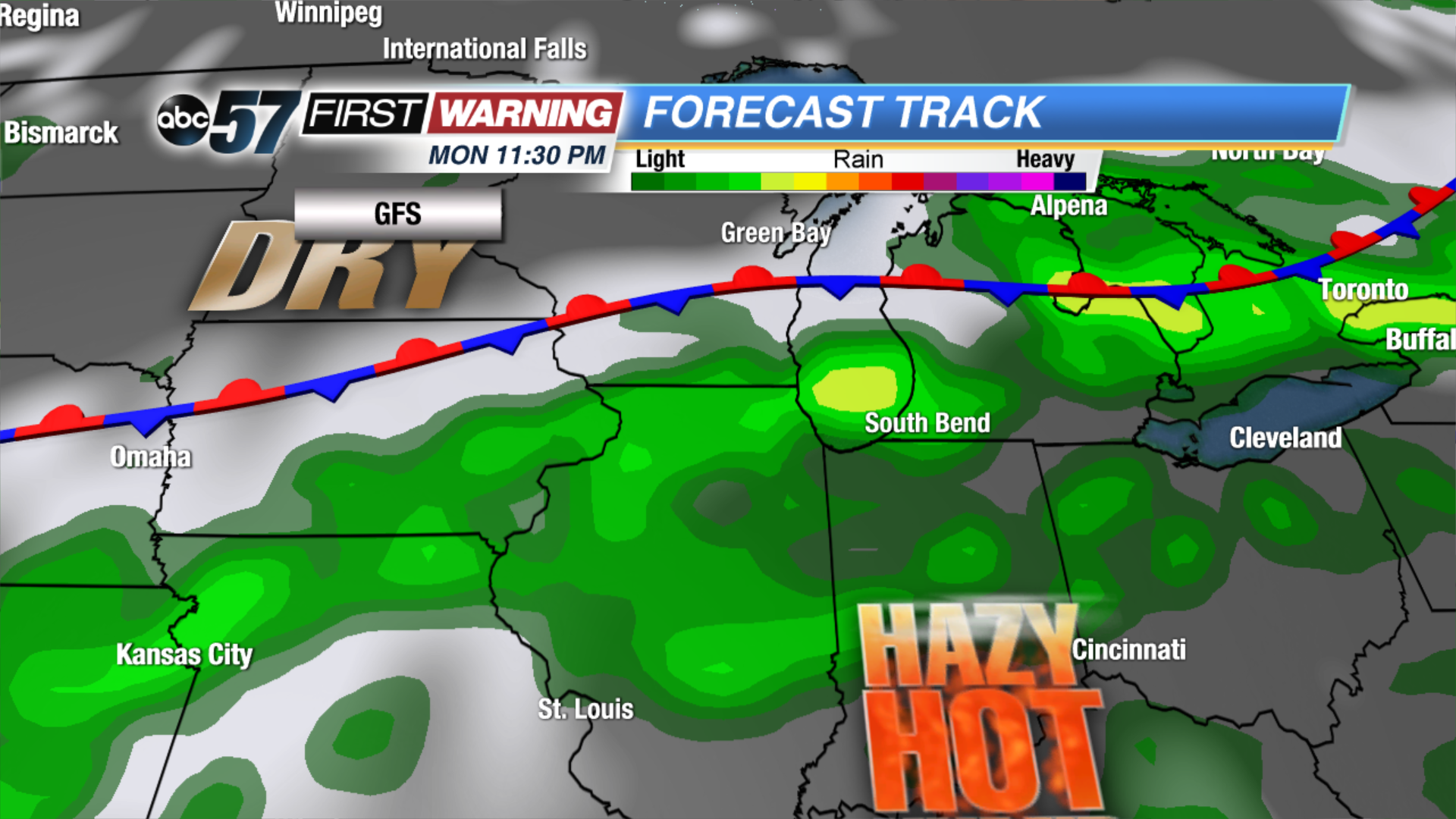 And, looking ahead, Michiana could certainly be contending with some thunderstorms over the weekend and early next week. The best chance will come Monday afternoon through Tuesday afternoon as a slowly-moving frontal boundary drops south from Wisconsin and Michigan. That will interact with hot and humid conditions, delivering an enhanced risk for scattered thunderstorms during this time. 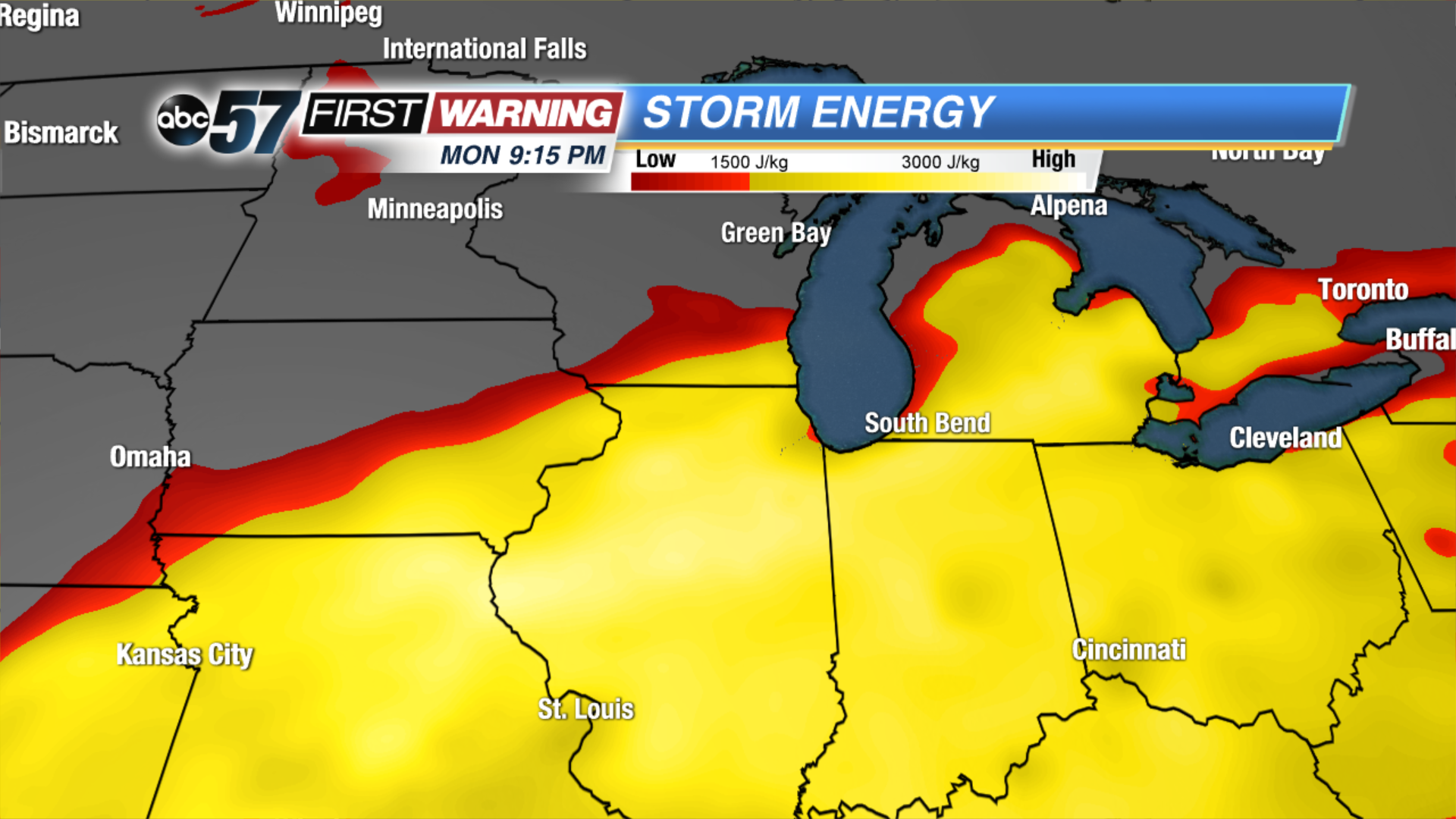 Storm Energy (CAPE) Monday evening.
But will any of the thunderstorms have the chance to turn strong or severe? It is still a little too early to determine exactly what our severe risk will be, but some parameters do support the idea of at least some severe weather threat late Monday and Monday night. The heat and humidity in place will allow plenty of "storm energy" (referred to as CAPE) to set up. That means storms that develop will have plenty to feed on to grow and sustain themselves. 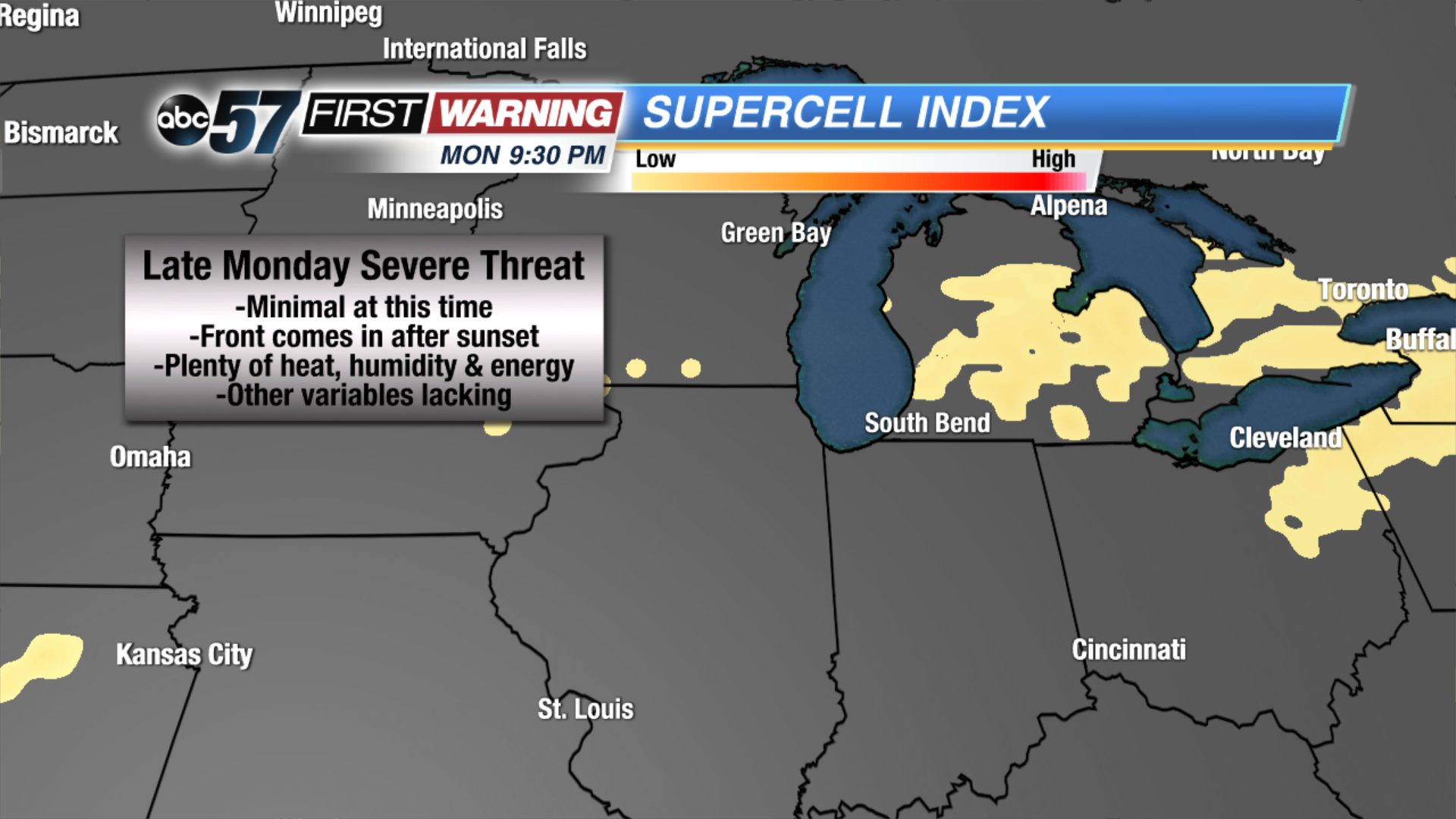 Supercell Index Monday evening.
However, in order to get severe weather, other factors must be investigated. One of those factors is wind shear, or the change in wind speed or direction with height. The Supercell Index (shown above) factors in both storm energy and wind shear and spits out a value on a numerical scale. Any value over 1 can be supportive of severe weather. For Michiana, forecast models currently keep the Supercell Index value below 1. For this reason, the overall severe risk looks relatively low for late Monday into Monday night. Despite this, the amount of heat, humidity and energy in place may be enough to overcome deficits seen in other variables. The result is a low severe risk as of Thursday evening, but it could increase depending on how everything comes together. Stay with ABC 57 First Warning Neighborhood Weather for updates through the weekend.
Share this article: