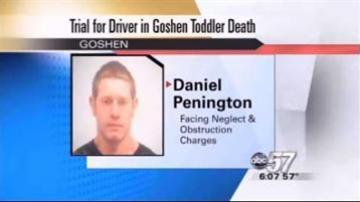 GOSHEN, Ind -- Monday marks day one of the trial of a man accused of runing over his girlfriend's daughter.

Daniel Pennington was driving the truck that ran over 18-month-old Mariah Gibson in May. Pennington is facing charges for her death and also for obstruction.

He and Mariah's mother, Mande Turner-Berger, initially told police little Mariah was hit by a hit-and-run driver in their Goshen neighborhood. They later admitted to making up  the story just days later.

Turner-Berger accepted a plea deal in August and was sentenced to five years in jail.