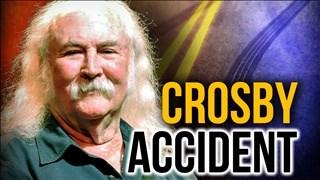 (CNN) The caller sounds extremely worried. He tells a 911 dispatcher that he hit someone with his car.

"We need an ambulance right now," the caller tells the California Highway Patrol.

Police have said singer-songwriter David Crosby hit a jogger with his car Sunday evening in Santa Ynez, California, near where the Hall of Fame musician lives.

On Tuesday the highway patrol released two 911 calls from the incident in which the frantic caller pleads for medical help for the man.

The operator tells him the highway patrol is on the way. He asks the caller if the person is walking. The caller says he didn't see the man because of the setting sun and again worries about medical assistance.

"I need an ambulance, man. Ambulance. Fast," the man tells 911. They're on the way, he's told as the call disconnects.

Later, Crosby calls back, worried that the ambulance was not there yet.

"We need the ambulance now. This guy is hurt," the caller says.

Another 911 dispatcher tells him the ambulance is already en route and transfers him to a medical services dispatcher.

"Mr. Crosby was cooperative with authorities and he was not impaired or intoxicated in any way," said Clotworthy.

According to the spokesman, the jogger and Crosby were on the same side of the road.

Pedestrians are supposed to be on the left side of the road walking toward traffic, Clotworthy said. Joggers are considered pedestrians.

Crosby is known for weaving multilayered harmonies over sweet melodies. He is part of the celebrated rock group Crosby, Stills & Nash, and was also a member of the Byrds.

"David Crosby is obviously very upset that he accidentally hit anyone. And, based off of initial reports, he is relieved that the injuries to the gentleman were not life threatening," said Michael Jensen, a Crosby spokesman. "He wishes the jogger a very speedy recovery."