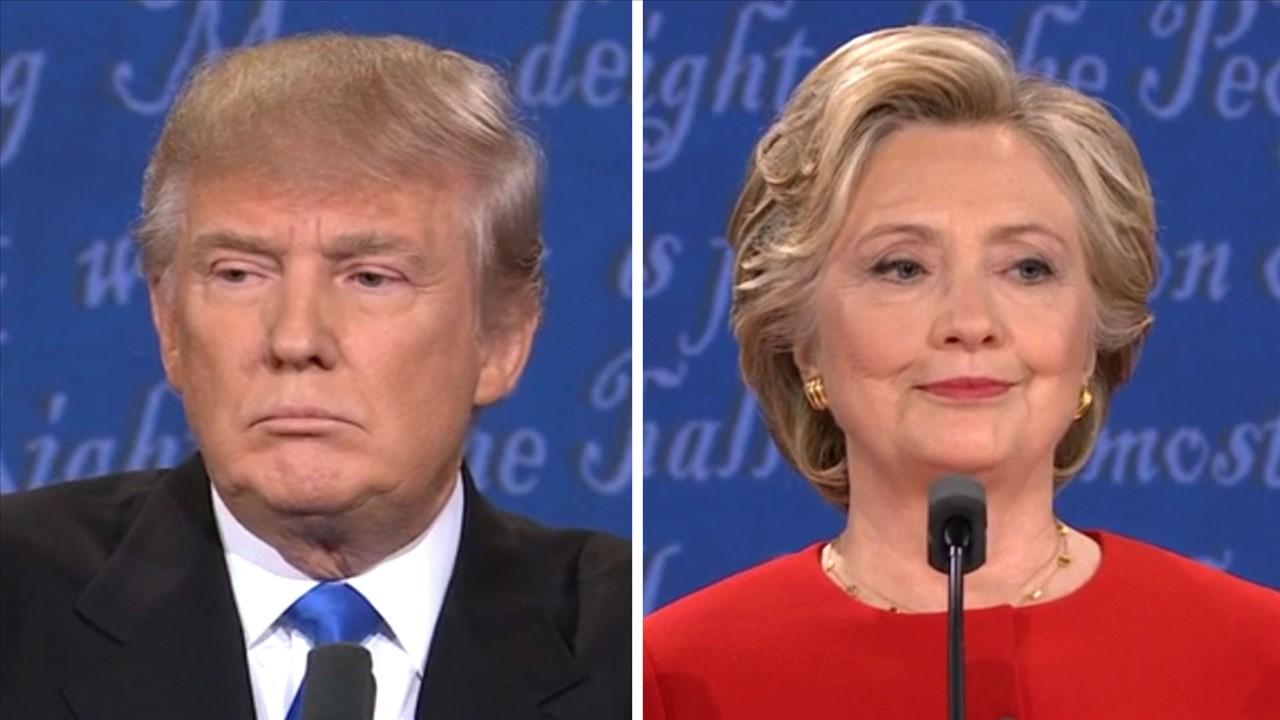 RALEIGH, North Carolina (CNN) -- As soon as the first debate of the 2016 presidential election was over, both Donald Trump and Hillary Clinton were quick to claim victory.

But by the next morning, one of them had become far less cheerful.

Just hours after Clinton and Trump clashed on stage at Hofstra University in one of the most highly anticipated political events in modern history, the two presidential nominees took markedly different tones as they reflected on the previous night's debate.

Clinton and her aides showed all of the outward signs of a team riding high.

The Democratic nominee boarded her plane at Westchester County Airport to applause and cheers from her staff. Before taking off to Raleigh, North Carolina, for a campaign rally, a smiling candidate walked to the back of the plane to gloat to reporters about a "great, great" evening.

"One of my favorite baseball players growing up, Ernie Banks, used to get so excited about going to play that he would say, 'Lets play two,'" Clinton said. "So I am looking forward to the next debate and the one after that."

And taking a dig at Trump's complaint after the debate that he was given a "defective" microphone, Clinton quipped: "Anybody who complains about the microphone is not having a good night."

And in fact, the Republican nominee did not appear to be having a good morning.

Calling into Fox News' "Fox & Friends" early Tuesday, Trump rattled off more than one complaint about the debate.

His first target was NBC News' Lester Holt, the moderator of Monday night's debate. Just hours before, Trump had praised Holt in the spin room to CNN, saying the newscaster had done a "great job" and was "very fair."

Those compliments were long gone.

Trump was still irritated -- and even conspiratorial -- about his microphone.

"My microphone was terrible," Trump complained. "I wonder: was it set up that way on purpose?"

To top things off, Trump unloaded on former Miss Universe Alicia Machado, who has alleged that the businessman's disparaging treatment of her had led to eating disorders and depression.

With no apparent consideration for the political recklessness of his crude comments, Trump once again went after Machado's physical appearance, bringing her up on his own.

"That person was a Miss Universe person, and she was the worst we ever had. The worst. The absolute worst," Trump said. "She gained a massive amount of weight and it was a real problem. We had a real problem."

Those remarks could prove to be detrimental for a candidate already struggling with women voters and with the perception that he lacks the temperament to be president.

Machado also held a press call Tuesday afternoon to respond to Trump's comments and express her support for Clinton. She told reporters that watching the 2016 election was like a "really bad dream."

"I never imagined in 20 years later I will be in this position," she said. "Watching this guy again doing stupid things and stupid comments."

Speaking in Raleigh Tuesday afternoon, Clinton continued to make digs at Trump's debate performance, saying it was "very clear that he didn't prepare."

"What we hear from my opponent is dangerously incoherent," she said. "It's unclear exactly what he is saying, but words matter."

Marguerite Scott, a retired 68-year-old woman from Cary, North Carolina, who attended the Raleigh campaign event, said she was struck by Trump appearing to lose his composure during the debate. Scott lso chastised the GOP nominee for his comments Tuesday about Machado.

"Men in general should stop objectifying women. If she is fat, that is her business," Scott said. "And to put her on blast like that shows what a misogynist person he is."

Asked what she thought of Trump's complaints about a defective microphone, Scott responded: "We heard him loudly and clearly, and bigly!"

CNN's David Wright and Dylan Byers contributed to this report.