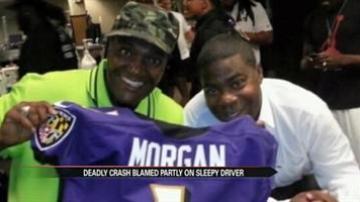 Investigators say the Walmart truck driver who caused a deadly accident involving comedian Tracy Morgan was tired behind the wheel.

Kevin Roper has been charged in the accident.

Police said Roper hadn't slept in more than 24-hours when he got behind the wheel of the big rig.

He is accused of crashing into Morgan's limo on the New Jersey Turnpike causing it to slam into other cars and overturn.

"Felt like an explosion. I just remember the, the impact and the vehicles going by. Then I climbed around and I heard Tracy screaming for help, but I couldn't reach them and pull them," said limo driver Tyrone Gale.

Morgan is expected to remain in the hospital for several weeks.