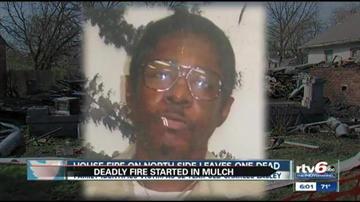 INDIANAPOLIS — Firefighters say it took 30 different fire units to put out the flames at an Indianapolis home early Sunday morning.

Officials say the fire started in some mulch outside of one house before it quickly spread to a second before firefighters could get to the scene.

At first firefighters believed the house was empty.

Once the fire was out, they discovered a body inside.

Fire officials say there were no working smoke detectors inside the home.