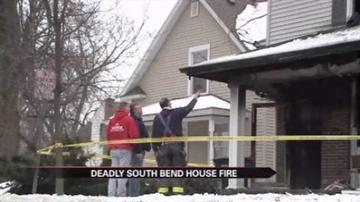 SOUTH BEND, Ind. -- Two children died and four others were injured in a fire in the 1200 block of East Haney Avenue in South Bend early Sunday morning.

Sunday morning was tough on Cheryl Worsham, and she said it is still tough to talk about now.

"The mom was crying and saying please save my babies," said Worsham.

That was the scene next door as a fire engulfed a mother's apartment around 4:30 a.m. in the 1200 block of East Haney Avenue.

"There was heavy fire coming out of the first floor," said David Maenhout, the South Bend Fire Department Battalion Chief. "There were two children trapped upstairs so we went right into rescue mode."

Maenhout would not reveal if the two children died in the fire at this time, but he did say two people were killed.

"We did everything we could en route to the hospital to try to revive them," said Maenhout. "We are not indicating exactly yet, who they were, and which ones lost their lives, but here was a combination of three children and two {three} adults."

Neighbors said that the woman inside the apartment jumped out of the second story window with a 5-year-old child in her arms. As she fell, she hit the gas meter.

"The mom and her 6-year-old {5-year-old} got out the back window and jumped out the window," said Worsham.

"The mother tried to get back in to help the others and she was forced back due to the heat and smoke," said Maenhout.

And not just for neighbors, but for the firefighters as well.

"It's part of our job obviously. It obviously doesn't happen very often and when it does, it's traumatic to everyone involved," said Maenhout.

Fire investigators are still working on a cause of how this fire started; however, they said they believe it started in the first floor living room.