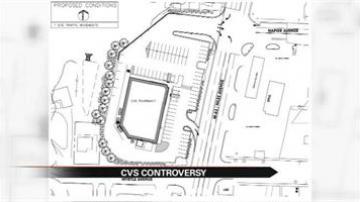 ST. JOSEPH, Mich. -- The debate continues in St. Joseph, Michigan about whether a CVS pharmacy should be built on the corner of Niles and Myrtle Avenue. Many changes have been made to the original plans, but many residents are still opposed to the idea.

Developers Eric Harvey and Jim Cook are looking to submit a Planned Unit Development proposal which they say would allow for more flexibility.

Residents say there would be too much traffic on Niles Avenue.

Stobbelaar has lived on Myrtle Avenue for 29 years. He says the added traffic would be a safety hazard for drivers.

"If we had an emergency here or needed a fire truck or an ambulance, there would be no way they could get down here," said Stobbelaar.

Developers say their new design, which eliminated three driveways from the original plans, would reduce the chance for accidents by seven to ten percent.

Residents opposed to the CVS say they have about 1,000 valid signatures on a petition. They say because there are already four pharmacies in a half a mile stretch of Niles Avenue, the CVS should be built in a different part of St. Joe.

"I look at it and I say Ok in the long run is it going to be a positive or a negative to our community? And I can't see a way that it's going to end up being a positive," said Stobbelaar.

Harvey issued this statement "We heard and understood the opposition to rezoning certain residential parcels, so we agreed to maintain a residential parcel on myrtle and we converted the project to a Planned Unit Development that does not rezone any property."

"St. Joe needs CVS. Two reasons. They need the tax dollars from a growing business, and they need to show the rest of the business community that they are in favor of supporting development in St. Joe," said Hemerling.

A proposal for a roadway expansion for the proposed CVS will go before the city commission at City Hall Monday at 6 p.m. If the city authorizes its staff to look at this fourth approach, a more detailed plan will be presented Thursday.