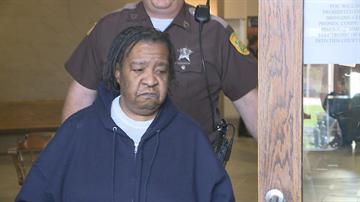 SOUTH BEND, Ind. – Dellia Castile, 53, was found guilty on three counts of felony neglect on Wednesday stemming from the horrific abuse her grandchildren suffered at the hands of her son Terry Sturgis that also resulted in the tragic death of 10-year-old Tramelle Sturgis.

On November 4, 2011, South Bend police were called to the home Castile shared with her son Terry Sturgis and his children on the 1100-block of West Washington Street.  Investigators found 10-year-old Tramelle Sturgis severely beaten and he was pronounced dead at an area hospital later that day.  Detectives determined that Terry Sturgis had been torturing and abusing Tramelle and his other 9 and 14-year-old sons for years.  An autopsy found burn marks and bruising on Tramelle’s body among other indicators of horrific abuse.

Last May Terry Sturgis was convicted on 14-counts, including murder, and later sentenced to 140-years in prison.

Vaeghn rode the bus to attend nearly every day of the trials of Terry Sturgis and Dellia Castile.  She, like many others in the neighborhood where the tragedy happened, believed Castile was just as responsible for her grandson’s death for not reporting the abuse.

“I cared about the kids, you know, it was a bad tragedy what happened,” Vaeghn explained.

Pam Bryant, who runs R & M’s Snack Shack on Washington Street, said the Sturgis children would often come into the store.  In the aftermath of the death of Tramelle Sturgis she raised donations for the family and even comforted Castile at a vigil.  After Castile was charged and details of the case came out, Bryant said she felt betrayed.

“It wasn't like she lived in another wing of the house…impossible, you know that's just impossible that she didn't know anything about it," Bryant said of the abuse.  “Who lets a grown-up choke and burn and what all he did, he beat them with sticks and you know who does that?"

Castile’s attorney argued that she was unaware of the full extent of the abuse and that she acted to restrain her son.  The jury determined that wasn’t enough to absolve her of not reporting the abuse and found her guilty.

Those who live and work near the scene of the tragedy on West Washington Street say they’re hoping Castile gets what she deserves when sentenced and are praying for the four surviving Sturgis children.

“I’m glad that the kids are safe, their aunt told me that they're getting very good grades now and the boys really look good," Pam Bryant explained.  “I’m just happy for the kids that they’re out of that situation.”

Dellia Castile is scheduled to be sentenced on November 8.  She will be sentenced for one class “A” felony with a possible penalty of 20 to 50-years and two class “B” felonies with possible sentences of 6 to 20-years.