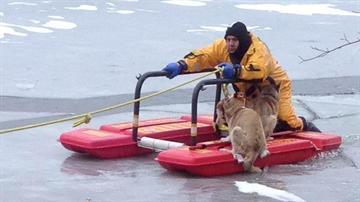 Deputies were called to the area of the Lake of the Woods Public Access for a report of two dogs stranded on the ice.

Deputies arrived and found the dogs stranded 50-feet from shore.

The Decatur Hamilton Fire Department launched an ice rescue device with a firefighter on it. The firefighter grabbed the two dogs without incident.

The dogs were taken to Van Buren County Animal Control in Hartford where they are being held while their owners are located.

The dogs appeared healthy and did not appear to have been on the ice for very long.