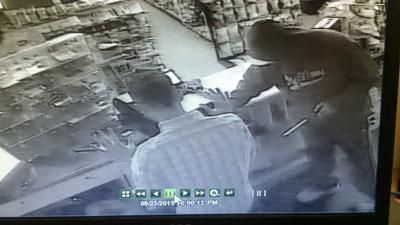 The Berrien County Sheriff's Department is investigating a robbery at the Belle Plaza Party store on 11th Street in Niles, Michigan.

The robbery happened on Wednesday, September 23 at approximately 10 p.m.

Deputies say the man entered the store, displayed a knife and took an undisclosed amount of cash from the register.

The suspect may have left in a silver-colored vehicle.

The suspect was wearing white gym shoes, dark colored athletic pants with light colored striping on the outsides from top to bottom, dark colored hooded sweatshirt with the hood up with writing on the front of the sweatshirt believed to be “Old Navy”, face mask covering the lower half of suspects face, and a ball cap.

The weapon used was a butcher knife according to Captain Robert Boyce at the Berrien County Sheriff's department.

Boyce said, “A lone individual male entered the store armed with a butcher knife, he confronted the store clerk.”

In surveillance video, it appears the clerk is forced to hand over some of the cash and the suspect drops some of it on the ground. The suspect stuffs the money in his pockets and runs out the front door of the store.

On Friday the party store was business as usual.

Eilene Rogers said, “During the day there’s a lot more traffic a lot more people coming in and out so it would be a lot harder for somebody to come in and rob you and not be seen.”

Rogers said she's not concerned, but the clerk who was victim in the robbery is terrified and doesn’t want to be identified.

if you have any information in robbery, contact the Berrien County Sheriff's Department at 269-983-7141 x4900, email detectives@berriencounty.org or call crime stoppers at 1-800-342-stop.