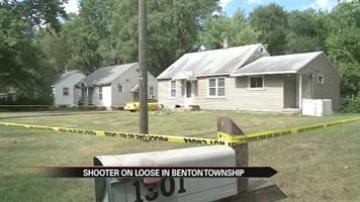 BENTON HARBOR -- The Berrien County Sheriff's Department is investigating reports of a shooting on Warren Court just before noon on Thursday.

According to deputies, an adult male was inside the house at 1293 Warren Avenue when he was shot.
Deputies say the shots came from outside, in the front yard.

The victim was taken to Lakeland Hospital in St. Joseph with non-life threatening injuries.

Several people who live on Warren Court say they heard the gun shots.

On eyewitness said a gunman in a champagne Toyota Camry fired two shots into the front door of the house.

“I saw a young lady come out, she’s got a cell phone and she’s saying ‘Oh no that ain’t happening to me, he ain’t doing that to me’ so I’m think she must know who it is. She comes out and then there is a guy in a black t-shirt laying on the ground and then the cop comes and wraps his feet up. The guy backed out really quick from what I saw. I guess it was Toyota Camry is what I was overhearing.  He hit the dirt and kinda fishtailed a little bit and caught the pavement and then he was gone," said Jerry Bonebright.

Bonebright said he has seen the car before.

“I know that was the same car that was sitting out here Tuesday night," said Bonebright.

Bonebright and his wife said the shooting was unsettling. They do not usually have any problems with crime in their neighborhood.