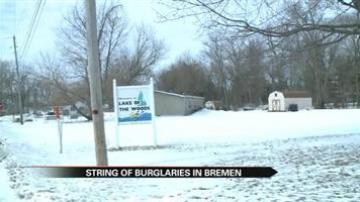 MARSHALL COUNTY, Ind. -- The Marshall County Sheriff's Department is investigating a series of burglaries that happened in the 300 block of West Shore Drive, Lake of the Woods in mid-February.

"It usually feels safe until the winter when everything looks so closed up and it gets so dark out here a lot," said Collen Forsythe.

Forsythe has lived in Lake of the Woods, a small neighborhood in Bremen, for over ten years.

Many homeowners only live there during the summer which leaves the homes vacant during the winter months.

"They are summer homes or the people went to Florida for the winter," said Forsythe.

Several homes in the neighborhood were burglarized between February 11 and February 14.

They found five homes in the 3000 block of West Shore Drive that had been burglarized.

"They ransacked all five of the houses going through them. They took some televisions, they took some coins, some silver, some cash, stuff they could find laying around the house," said Culp.

Forsythe blames the break-ins on the snow giving away the fact that people are not home.

"With all the snow we had there are too many driveways that were deep with snow and everybody knew that the houses were empty," said Forsythe. "We keep it all shoveled and we keep lights on and just make it look like people live here."

The sheriff's department asks residents who are part-time to arrange to have their driveways and walkways clear so it appears as though someone is home.

The items stolen include:


If you have any information, contact the Marshall County Sheriff's Department at 574-936-3187.