Deputies kill man who attacked them with a hatchet 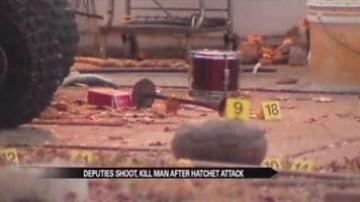 EVANSVILLE, Ind. -- A vandalism investigation turned deadly after an Indiana man tried to attack deputies. The deputies shot and killed the man.

The incident happened around 1 a.m. Tuesday morning in Evansville.

Two deputies questioned the man about a vandalism report.

And that is when police said the man became aggressive and tried to throw a hatchet at them.

The deputies said they shot and killed him in self-defense.

"Everybody mentally prepares for it and you train for this, you tell yourself that you'll be able to do what you need to do," Sheriff Eric Williams. "These two deputies were faced with that situation tonight and did what they had to do."

Neither one was hurt.