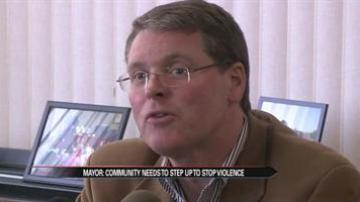 SOUTH BEND, Ind. -- While police are doing what they can to prevent violence by patrolling high crime areas and using the new SpotShotter technology, Deputy Mayor Mark Neal says tips are an important part of crime fighting.

Neal said the community needs to pay a larger role in reporting what they see and hear.

"We could have 500 policemen on the streets and it would not make a difference in many of these instances," said South Bend Deputy Mayor Mark Neal.

Neal said that so few tipsters come forward, police can't do much.

Neal says they are doing the best they can to address the recent violence in South Bend.

"I think in each of these cases, when the shooting has occurred, it wasn't the first evidence that there was a problem. People were aware that there were issues. We need people to say, 'I know something is happening.' Please report it," said Neal.

Neal blames a small number of people for a majority of the city's recent acts of violence, but wouldn't go as far as to label them gangs.

He blames the violence on people who act suddenly to settle their disagreements.

"We do have groups of people. They may be neighborhood, small cliques of people, they may just be some family members. We are certainly aware of those people and are concerned about activities," said Neal.

He also emphasized the importance of the relationship between police and neighbors. He asked residents who have information about crimes to call Crime Stoppers at 288-STOP.

"It has been in place for over two decades in our community. It's been clear that it's not something that has a caller ID. People should be comfortable with reporting it," said Neal.

In the next few weeks, Neal plans to have more conversations with community leaders to prevent future violence and promised a meeting to talk about specific details.