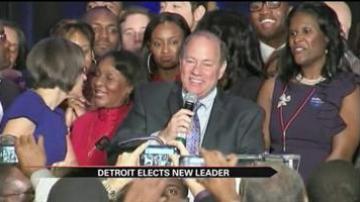 DETROIT -- The City of Detroit could be turning around with a new leader in charge.

In a speech last night Duggan thanked his family, the voters, and the people who worked on his campaign against the Wayne County Sheriff.

"And the thousands of campaign workers who knocked on more than 100,000 doors, I will never forget the work you've done," said Duggan.

Duggan says his experience rescuing the Detroit Medical Center from near bankruptcy ten years ago properly equips him for the job.

Detroit is facing a financial disaster and fighting for its life in bankruptcy court.