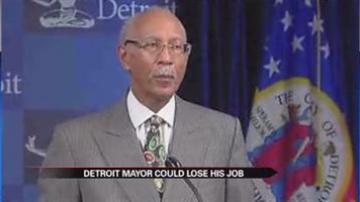 DETROIT -- The Detroit mayor may lose his seat in a recall election.

The county approved a petition to recall Mayor Dave Bing.

Organizers who want him removed from office have 90 days to get 43,000 signatures.

If that happens, a special election will be held in May.

Critics said Detroit is in a financial mess.

The mayor's office refused to comment on the recall effort.