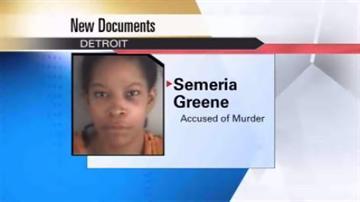 Semeria Greene has been charged with stabbing her daughter to death.

The court documents also say the mother sat on her steps in Detroit after the crime and said, "I can't believe I did this."

Greene has four other children who were taken into protective custody.

The state tried to have the child removed from her mother's care a month earlier but the request was denied.