Developers pull the plug on CVS in St. Joseph - for now 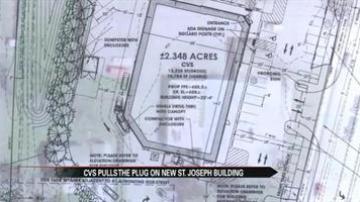 ST. JOSEPH, Mich. -- After facing strong opposition from residents and questions from commissioners, the developers of the proposed CVS at Myrtle Street and Niles Avenue in St. Joseph, Michigan decided to pull the plan before it went to a vote.

Almost 80 people showed up to the plan commission meeting concerning the proposed CVS.

Residents said they went into the meeting very hesitant because they were going up against big developers.

In the end, commissioners raised enough concerns the developers pulled their proposal and decided to go back to the drawing board.

"Inside I was tickled pink," said resident Bill Burrows.

Residents on Myrtle Street are relieved.

"I don't feel like we won, I feel like nobody lost because they still have the opportunity to come back with something workable," said resident Rick Stobbelaar.

Developers wanted to buy the Florin Funeral Home's property as well as the home at 711 Myrtle Avenue for the CVS.

They wanted the home to be rezoned commercial, then planned to tear it down for a parking lot.

That's when the developer's attorney pulled the plan before the rezoning request ever went to a vote.

There could still be a CVS in St. Joseph. Since the plan wasn't formally rejected, developers can come up with alternatives and file another application.

Residents say numerous homeowners suggested moving the CVS to another location, like Benton Harbor, to bring business to that area.

"We got a 30 day grace period because the planning commission doesn't meet until next month so we'll see what happens with that," said resident Larry Blaylock.

We left a message for the developers' attorney, Mike Miller, but he has not returned our call.