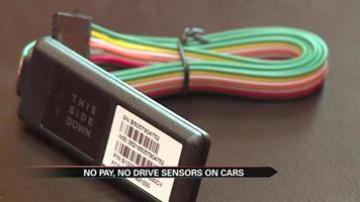 ELKHART, Ind. -- Car dealers are using technology to ensure people with bad credit are making their car payments. If they fail to pay on time, the dealer can keep the car from starting.

When times get tough, people often have to decide which bills to pay. In the winter months, heat, electricity and water usually take precedence.

"The most important thing I think for everybody is keeping a roof over their head," said Eddie Rodriguez, General Manager of the Mike Anderson Used Car Super Center.

Some dealers are installing sensors on cars sold to high-risk customers or those with bad credit.

"Not because they're a bad person, just the situation and the cards they've been dealt haven't allowed them the ability to pay for their bills on time," said Rodriguez.

Ashley Ball says at first she was thrilled about the program, it got her in a new car, but then she hit a bump in the road.

"I was doing okay until everything occurred with my job," said Ball.

Ball missed a payment and now, her car won't start.

Now she fears her car will be taken away just as fast as she got it.

"This is my only means of transportation. You know everything it's not in walking distance, doctors' appointments are all the way in Mishawaka so how are we supposed to do that?" said Ball.

Rodriguiez says it can help build the car owner's credit if they can make the payments on time.

"We try to report their credit to the credit bureau so that way in that 18 to 24 month period if they pay their note we have an opportunity to take them out of the program and put them into different loan types," said Rodriguez.

But in moments like these, Ball doesn't feel like it's worth it and she would think twice before signing up for a program like this again.

"I probably would hesitate, knowing the situation, things do occur where you're going to have to rearrange payments and stuff like that," said Ball.

There's nothing illegal about dealerships putting these sensors on cars, they go over everything with the customers and it's included in their contracts.