Diamond Avenue construction project to be complete in November 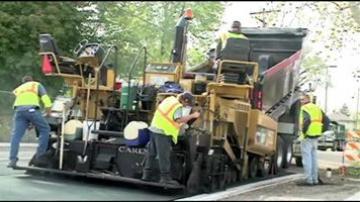 SOUTH BEND, Ind. -- The Diamond Avenue storm sewer project is wrapping up after two years. Residents in the neighborhood have spent the last two years living in the construction mess.

Diamond Avenue has new storm drains, a new road and the sidewalks and landscaping were improved.

Residents are most happy about the added street lights.

"We don't have to worry about anybody robbing, doing anything, because you can see," said Cedric Kirby.

"It was so dark you couldn't see," said Kirby.

He says the construction project has helped more than just the city's sewer problem.

He says crime has already gone down on the other side of diamond and he's hoping for the same on his side of the street.

Now that they have street lights they have a lot less to worry about.

"If anything would have happened, you couldn't see anybody or be able to walk down that street and be alright," said Kirby.

Neighbors say the contractor has told them they're on track to finish in the middle of November.